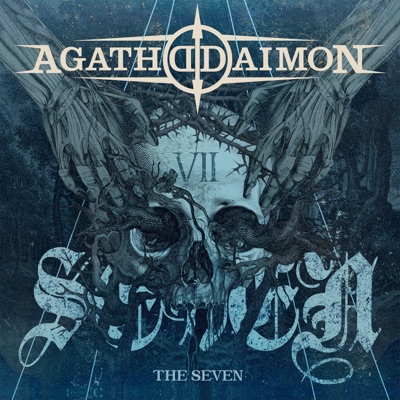 Everyone loves a comeback, and everyone loves a comeback more when the return is better than ever. German symphonic black metal stalwarts AGATHODAIMON were rock solid members of the Nuclear Blast roster for years, and consistently delivered album after album of grounded, riff-based and inventive darkness that bucked the trends and expectations of other bands in their orbit. After moving away from Nuclear Blast for their previous record, In Darkness, back in 2013, the band went silent for nine long years. But now, rising from the hellscape of a pandemic, wars, and Satan knows what other nightmares that have transpired in the last decade, the five-piece returns with three new faces and two old ones to deliver The Seven, a record of piercing, shining black light in a realm often overrun with grey sameness.

It is immediately apparent what Nuclear Blast saw in AGATHODAIMON, and why they were a part of perhaps the most prestigious metal label in the world, from the album’s first track La Haine. The tempo is driving, right in the pocket, and perfect for headbanging, and who doesn’t like a record that invites you to nod along with ease off the bat? The production here and across the record is slick and expansive, which is par for the course from the red headed sub-genre of the black metal family, but it’s still nice to feel the full power of hell with drums that hit the chest and orchestral elements with a weight that conjures images of black winged demons rising from the underworld. Vocalists Sathonys and Ashtrael have excellent vocal tone, and the lyricism is full of evocative imagery – a must have for a record like this.

The whole first half of the record keeps the hits rolling. It’s a thrilling, grin-inducing ride that has so many hooky facets it makes the head spin. Ain’t Death Grand‘s subtle guitar leads and excellent refrain that begs the listener to scream along with the breakdown, combined with its tempo change in its last third, makes it a sharp standout. Wolf Within continues the strength of the record: mixing up the tempo. The fact that the band lean just as much on meat and potatoes chug riffs as they do on tremolo picking and blast beats is extremely effective in raising the fun factor here. Bonus points go to the unexpected sample use in the middle of the song.

Ghosts Of Greed keeps driving, while the clean vocals in the song take on a ghostly, crooning wail to embody the spirit of the song. The chug comes out once again and heads will be banging, no doubt. But the real strength of this track, and its follow up, Mother Of All Gods, is its striking lyricism. The latter, especially with its meditations on the contrast of open-mindedness leading to progress and ignorance leading to downfall, is the strongest on the record lyrically, and the line “Fear is the mother of all gods” is one of the best one liners of the year so far. Estrangement closes out the stellar section of the record with a surprisingly uplifting and triumphant tone in contrast to its heart-rending lyrics discussing the loss of love of a spouse and reflecting on the strength of that past love.

After such an adrenaline and hook-filled run with strong lyrics, it’s a shame the record takes a bit of a downturn at this point to its conclusion. The two part In My Dreams starts with a lush, triumphant instrumental prelude that, unlike many records where short instrumentals feel superfluous, actually is the highlight of the track, as after that prelude ends, the track dissolves into slightly problematic lyrics about violent fantasies that don’t feel at all like a far fetched fantasy like CANNIBAL CORPSE‘s lyricism. It feels a bit too grounded, which definitely makes it a bit uncomfortable hear. Furthermore it’s flat out the lyrically and musically weakest track, with its lyrics, problems aside, feeling like they were pulled from a generic mid-00s emo track.

Kyrie/Gloria is the most standard black metal track of the bunch, and it doesn’t stand out much among the rest in any way, although it does use actual Christian Latin mass readings in its closing with no alteration or tongue in cheek modifications, which is an interesting twist. Closing track The Divine does end the record somewhat strongly though, with its bursts of machine gun drums and riffs mixing in with its mainly doomy tempo. The modified double pitched vocals are meant to sound like a demon rising from hell, and the dark chasm of orchestral sounds certainly paints a picture of a dark angel smouldering in brimstone unfurling its wings, which is actually a great way to sum up the record as a whole.

AGATHODAIMON, despite one big misstep on The Seven, have come back with a furious vengeance. It’s an extremely well-crafted, great sounding record, with wicked riff hooks and lyricism that’s a cut above. The band feel locked in for most of the runtime down to the second, and they know exactly how to get the listener going by changing tempos and bucking the urge to load up on the black metal tropes and structures. It’s the difference that sets this record apart and makes it a great time to listen to, and an example to frame of a symphonic black metal album that knows that keeping the bodies moving and heads banging with simplicity is a recipe for success. AGATHODAIMON hits (almost) every mark on The Seven. Comeback complete.

How to join the Trade2 Earn stage?

Trade2 EarnDesign SkillsAugust 12, 2022
Visit the site: your consideration is a must while getting to the site of the Trade2 Earn, as there …
END_OF_DOCUMENT_TOKEN_TO_BE_REPLACED

he put up spectacular fights, he helped his