London (CNN Business)Britain has banned Russian state TV channel RT, saying it was incapable of providing impartial coverage of the war in Ukraine.

UK broadcast media regulator Ofcom said it had been conducting 29 investigations into RT’s coverage of Russia’s invasion, and had taken into account the channel’s ties with the Russian state and new Russian laws which “effectively criminalize” any journalism that departs from the Kremlin’s narrative in relation to the war.
“Freedom of expression is something we guard fiercely in this country, and the bar for action on broadcasters is rightly set very high,” Ofcom CEO Melanie Dawes said in a statement. “Following an independent regulatory process, we have today found that RT is not fit and proper to hold a license in the UK. As a result we have revoked RT’s UK broadcasting license.”
The European Union had already banned RT from broadcasting as part of sweeping sanctions imposed on Moscow in response to the invasion of Ukraine.
The measure suspended RT’s broadcasting activities in the European Union, or directed at it, affecting its UK, German, French and Spanish networks. Ofcom confirmed in its statement Friday that the channel was already off air in the United Kingdom because of the EU sanctions.
The Kremlin described Britain’s move as “anti-Russian madness.”
“This is a continuation of the anti-Russian madness that is happening in Europe and the US,” Kremlin spokesperson Dmitry Peskov told reporters. “This is another step to grossly restrict freedom of speech, to violate all laws related to the work of the media,” he added.
RT’s ability to project President Vladimir Putin’s talking points around the world has been significantly constrained in recent weeks as cable carriers and social media channels dumped the broadcaster. 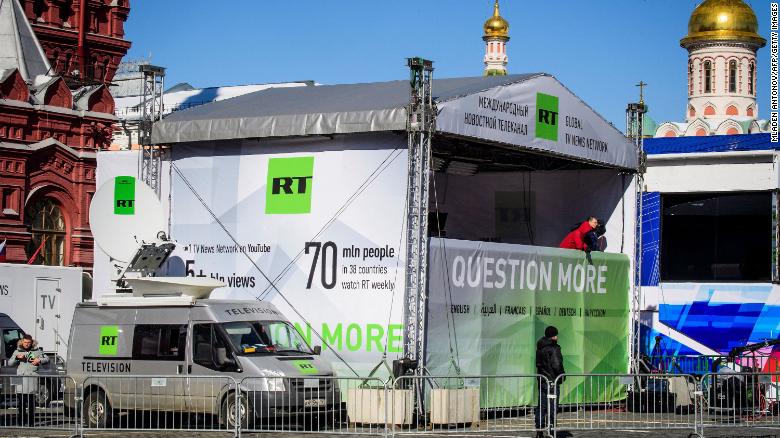 An RT broadcast tent is seen on Red Square in Moscow on March 18, 2018.
DirecTV, one of only two major television providers in the United States to carry RT, said earlier this month it was cutting ties with immediate effect. A few days later, RT America decided to cease production and lay off most of its staff.
Ofcom’s move could trigger further retaliation by Russian authorities against British broadcasters such as the BBC. Russian media regulators restricted access to the BBC website earlier this week, having previously taken similar action against its Russian language website.
“I think this is only the beginning of the response to the information war unleashed by the West against Russia,” Russia’s Foreign Ministry spokeswoman Maria Zakharova said in a Telegram post on Wednesday.
RT had broken UK broadcasting rules repeatedly, long before the invasion of Ukraine.
In July 2019, Ofcom fined RT £200,000 ($263,000) for repeatedly breaking impartiality rules in its coverage of the Skripal poisonings and the conflict in Syria. It found that RT had failed to maintain “due impartiality” in seven programs that aired in March and April 2018.
The programs were broadcast after the poisoning of former Russian double agent Sergei Skripal and his daughter. UK authorities said they were the victims of an attack conducted by agents of the Russian military intelligence service, the GRU.
RT said Friday that the UK ban was “political.”
“For many years in the UK they have been looking for a formal reason to close RT, but they have tried to maintain the appearance of freedom of speech. Now the masks are off,” the channel said in a statement on its Telegram account.

his own special place in British boxing

格 李Social LifeApril 27, 2022
The other day, TechCrunch reported that “Instagram is considering changing the two-step verification,” Instagram acknowledged. It will employ a passcode and login using a security app such as Google Authenticator. Thus, we welcome more authentication using token-based apps instead of …
END_OF_DOCUMENT_TOKEN_TO_BE_REPLACED

Full Body Pillow for Pregnancy, Stomach and Side Sleepers