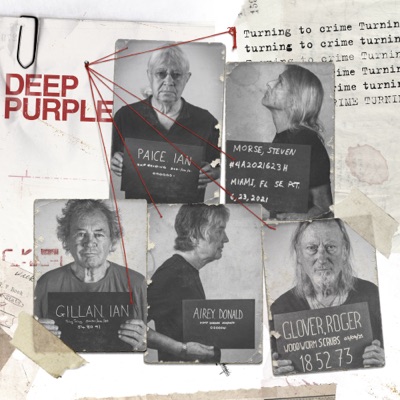 One could ask whether the world needs another cover of “Rockin’ Pneumonia and the Boogie Woogie Flu,” “See See Rider” (part of Mitch Ryder medley “Jenny Take a Ride”) or “Let the Good Times Roll.” You could ask that about any number of Chuck Berry songs, too, but you almost never hear complaints about the myriad versions of “Roll Over Beethoven” or “Johnny B. Goode” out there.

But Deep Purple, true rock believers with their legacy of lightning guitar runs, classically inspired organ fills and straight-ahead hits like “Smoke on the Water,” “Highway Star” and “Perfect Strangers,” come out of left field with Turning to Crime. The album is a set of 11 covers (plus a mostly instrumental medley) that, while not always reworked enough to justify their existence, usually offers, at the very least, an interesting (and rollicking) listen.

Some of these qualify as interesting if for no other reason than that it’s Deep Purple covering them. Looking at the almost bizarrely diverse song list on Turning to Crime, one would expect a few real curveballs. Take “The Battle of New Orleans”—yes, the 1959 Johnny Horton classic. Hearing these grizzled hard rock true believers (Ian Gillan, Roger Glover and drummer Ian Paice, along with not-so-newcomers” Don Airey and Steve Morse) tackle such a song may be disorienting. But they give it their best, and complete with fiddle and whistle, it’s a credible, fun listen.

Similarly, “Let the Good Times Roll,” popularized by B.B. King, Bobby “Blue” Bland and others, gets a somewhat tougher horn-fueled New-Orleans-style treatment than the original hit. It sounds like Deep Purple—sort of—and that’s the magic here. This is a band saying “Let the Good Times Roll” by taking a stab with something their fans are probably not used to hearing from them.

Indeed, the best performances on Turning to Crime are refreshing Deep-Purple-izations of often overfamiliar material. Bob Dylan’s “Watching the River Flow,” a sort of piano-based shuffle, gets a faster, more standard rock arrangement here. Longtime Deep Purple keyboardist Airey doesn’t really replicate Leon Russell’s piano style of the original, but instead breaks out a near classical flourish to finish the song.

Similarly, the Yardbirds’ “Shapes of Things” gets the Deep Purple treatment, this time slower and heavier than the original. Whether that’s an improvement on the Yardbirds’ take I up for debate, but if you’re a Deep Purple fan, the answer may well be “yes.” Same with the tough take on Fleetwood Mac’s “Oh Well,” a showcase for Morse, especially. And “White Room” is basically taking Cream’s game and upping the ante. This song is a natural for Deep Purple, covers album or not.

Not all of these songs improve on history. The cover of “7 And 7 Is,” a bizarre 1966 song by the psychedelic band Love, isn’t really different enough from the original to make it stand out (the Ramones’ version is faster, but similar, too). Little Feat’s “Dixie Chicken” gets a fairly faithful treatment, complete with the requisite syncopation, notable mostly for who’s performing it. But hearing these guys, who’ve been taking the same basic approach to hard rock for 50 years, tackle Little Feat or B.B. King is, if not a revelation, certainly interesting and at times captivating.

But whether these songs are new interpretations or fairly straightforward covers, most of the songs on Turning to Crime let these fairly straight-ahead veteran players shine in unfamiliar ways. Keyboardist Airey shows off his boogie-woogie chops on “Rockin’ Pneumonia” and the Mitch Ryder medley, and his organ fills on several of these numbers would make the departed Jon Lord proud. And Gillan, never the most versatile singer, does right by most of these wildly diverse songs.

Charles RangelE-MarketingMarch 24, 2022
The book now covers the fundamentals of various antennas and concepts in the first half of the book and then …
END_OF_DOCUMENT_TOKEN_TO_BE_REPLACED

mayur gunjalE-MarketingMarch 3, 2022
Market Overview The revamped need for low fat and sugar-free ice cream has risen increasingly, which is appraised to transform …
END_OF_DOCUMENT_TOKEN_TO_BE_REPLACED

* The most complete book of its kind on the market,