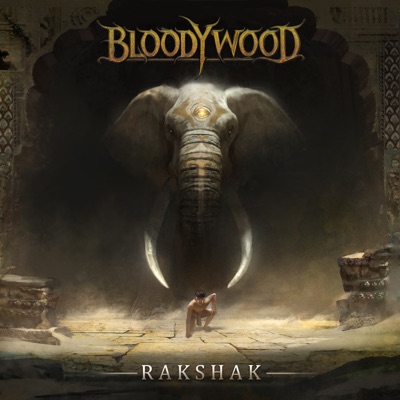 The first time I encountered Indian folk/nu metal band Bloodywood was through my Bandcamp feed, back in December of last year. They dropped “Gaddaar,” the first track from their first album of original songs, Rakshak, and I was immediately hooked. Soon after, a certain fuzzy lemur friend of mine informed me that this group was pretty well known already for their cover songs, but that they had been steadily dropping original singles over the last year or two, all of which were of high quality. Then, I learned that the band routinely directs their efforts and influence towards various charity and support works, including buying a local animal rescue service a new ambulance. In an instant, I became a big fan, and Bloodywood‘s debut LP climbed near the top of my most anticipated releases of 2022. I’m happy to report that it more than lives up to my expectations.

Bloodywood‘s approach to metal is, on the surface, similar to Linkin Park‘s in that they often combine rapped verses with sung choruses—utilizing both English and Hindi lyrics—backed by gym-ready riffs reminiscent of Hacktivist, We Butter the Bread with Butter, and even Dyscarnate. Look beneath those superficialities and you find a ton of cool Indian folk instrumentation playing along, particularly weighted towards woodwinds and festive drums. Additionally, Bloodywood writes more mature lyrics than the standard I expect from this scene, adopting decidedly uplifting, thoughtful, and/or activist attitudes. Most importantly, Rakshak never runs out of steam. It’s an elephantine stampede of fun that infuses every moment of its forty-eight minute runtime with catharsis.

Rakshak succeeds in no small part because it expresses complex human experiences through effortlessly accessible writing. My absolute favorite piece of evidence to that point is Song o’ the Year frontrunner, “Yaad.” Navigating the death of a best friend (specifically, a pet) with simultaneously mournful and reassuring textures, this song hits like a runaway train. It’s got great lyrics and a monumental chorus, plus an excellent solo. But the real showstopper is this galloping riff/beat combo that drives the pre-chorus, which sounds exactly like the rhythm of an excited dog thundering to greet me after a long time apart.1 Other highlights like the immense “BSDK;” the hook-laden “Chakh Le” and “Dana-Dan;” and the incredibly melodic “Aaj” and “Zanjeero Se” don’t strike my heart as deeply as “Yaad.” Nevertheless, these cuts cover a lot of ground to bolster the album with memorable choruses, groovy rhythms and riffs, and dynamic pacing.

Before I inevitably suffer the brutal swing of AMG Himself‘s Accursed Scythe of Firing for awarding a positive score to a nu-metal album, let me offer this disclaimer: Rakshak won’t change the minds of whomever rejects nu-metal on principle. I am not one of those people, and in turn found this record effortlessly enjoyable and highly rewarding. In light of that, I encourage anybody intrigued by this review to give Rakshak a fair shake. You might just find that Bloodywood crafted an energetic record worthy of your time and attention. It’s certainly worth mine!

wartiso septiBlogsFebruary 17, 2022
A new behind-the-scenes video from the set of the Willy Wonka prequel movie reveals Timothée Chalamet and a new child …
END_OF_DOCUMENT_TOKEN_TO_BE_REPLACED

Ray Liotta, of ‘Goodfellas’ and ‘Field of Dreams,’ Dies at 67

Candy FimollaUncategorizedMay 26, 2022
Ray Liotta, who created intense, memorable characters in “Goodfellas,” “Field of Dreams” and other films as well as on television, …
END_OF_DOCUMENT_TOKEN_TO_BE_REPLACED

Walmart was a sensible first partner for the new effort

Gary SmithUncategorizedNovember 29, 2021
Walmart was a sensible first partner for the new effort, as the retailer has been increasingly investing in livestream events …
END_OF_DOCUMENT_TOKEN_TO_BE_REPLACED

Why is Estate Jewelry in High Demand

Rogers JewelryUncategorizedJanuary 28, 2022
Jewelry, no matter how old, doesn’t lose its charm. It may not appeal to the original owner but may be …
END_OF_DOCUMENT_TOKEN_TO_BE_REPLACED