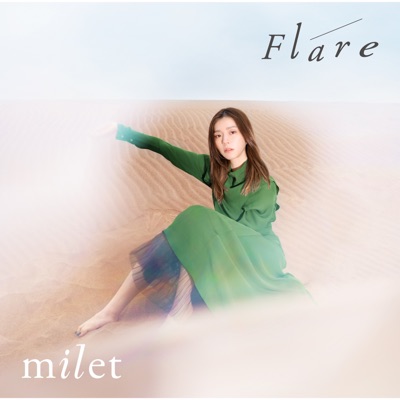 milet has released all the jacket photos and contents of the 8th EP “Flare” to be released on March 9th next month. It was The CD jacket of the first edition and the regular edition is a costume jacket with the appearance of milet standing in a bright green costume in the desert and dead grass, and the limited-time production animation version is Fuji TV “Noitamina” and others. The scene that was impressive in the second cool ending video of the TV anime “Ranking of Kings” being broadcast is the anime jacket that was drawn again for this CD. It was In addition, the recorded songs are also announced. The NHK winter sports theme song “Fly High” was performed in collaboration with the NHK Symphony Orchestra, and it was also used in the ongoing broadcast of the Beijing Olympics, showing great excitement “Fly High -Orchestra Ver.- (milet with NHK). Symphony Orchestra) ”is finally recorded.

This work contains all 4 songs including “Flare”, the second cool ending theme of the TV anime “Ranking of Kings”. A collaboration version of the NHK winter sports theme song “Fly High” with the NHK Symphony Orchestra “Fly High -Orchestra Ver.-” is also included. The jacket of the first limited edition / regular edition is an impressive jacket with the appearance of milet standing in a bright green costume in the dead grass of the desert, and the jacket of the limited edition animation edition is the second “King Ranking” An illustration that redraws the scene of the cool ending video is used.

Kuzinskiy was looking for his 9-year-old cat

oliva binArchitectureMay 28, 2022
KHARKIV, Ukraine — Yurii Kuzinskiy meant to take a nap in his bedroom. But in the haze of a hot …
END_OF_DOCUMENT_TOKEN_TO_BE_REPLACED