Images of dead Ukrainians ‘a punch to the gut’

(CNN)Secretary of State Antony Blinken said Sunday that the State Department would help document any atrocities the Russian military committed against Ukrainian civilians, following new images from AFP out of a town northwest of Ukraine’s capital of Kyiv with the bodies of at least 20 civilian men found lying strewn across the street.

“You can’t help but see these images as a punch to the gut,” Blinken told CNN’s Dana Bash on “State of the Union” on Sunday. “Since the aggression, we’ve come out and said that we believe that Russian forces have committed war crimes, and we’ve been working to document that, to provide the information we have to the relevant instructions and organizations that will put all of this together. And there needs to be accountability for it.”
Last month, the State Department formally accused Russian forces of war crimes in Ukraine. Asked Sunday whether Russian troops were committing genocide, Blinken said, “We will look hard and document everything that we see, put it all together, make sure that the relevant institutions and organizations that are looking at this, including the State Department, have everything they need to assess exactly what took place in Ukraine, who’s responsible and what it amounts to.” 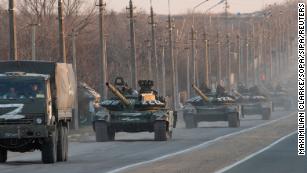 Russia shifting focus to show a victory by early May in eastern Ukraine, US officials say
NATO Secretary General Jens Stoltenberg was also asked later Sunday by Bash if the Russian actions in Ukraine constituted genocide, but he opted to call it “a brutality against civilians we haven’t seen in Europe for decades.”
Those remarks contrasted with those of Ukrainian President Volodymyr Zelensky, who said Sunday after images emerged of civilian bodies strewn across the streets in the town of Bucha: “Indeed. This is genocide.”
“The elimination of the whole nation, and the people. We are the citizens of Ukraine. We have more than 100 nationalities. This is about the destruction and extermination of all these nationalities,” Zelensky told CBS’ “Face the Nation.”
CNN has not been able to independently confirm the details around the men’s deaths. CNN has requested comment from the Russian defense ministry regarding allegations of the execution of civilians in the Kyiv region and other parts of Ukraine.
Also Sunday, former Secretary of State Hillary Clinton called for further action against Russia and its president, Vladimir Putin, telling NBC’s “Meet The Press” that “now is the time to double down on the pressure.”
“I think we are really looking at this with our eyes wide open and seeing very clearly the threat he poses, not just to Ukraine, as we can watch every night on our news, but really to Europe, to democracy and the global stability we thought we were building in the last 20 years,” Clinton said.
Blinken on Sunday declined to confirm reporting from CNN and others that the US was helping facilitate the transfer of Soviet-era tanks to Ukraine, which was one of the weapons systems Zelensky has been seeking.
But Blinken said the US and NATO countries were helping to get Ukraine the weapons it needed, adding there would soon be 10 anti-tank weapons systems in the county for every one Russian tank that’s in Ukrainian territory.
“Across the board, what we’re trying to do is make sure the Ukrainians have the systems they need that they can use and they can use right away,” Blinken said.
Republican Sen. John Cornyn of Texas, a member of the Senate Intelligence Committee, told Fox on Sunday that he supports sending the Ukrainians “anything that they can use and as fast as we can get it there.”
“We can’t dither and worry about some of the niceties here when the Ukrainians are fighting for their very lives, and if they feel like they need to take out a fuel depot across Russian border, go for it,” he added, referring to an alleged strike on a Russian fuel depot late last week.
Russia has accused Ukrainian helicopters of striking the fuel depot in Belgorod. CNN could not verify the Russian claims, and the Ukrainian Ministry of Defense has neither confirmed nor denied the attack.
Asked about the prospect of Ukraine maintaining neutrality between the West and Russia as part of a negotiated end to the war, Blinken said the Biden administration would support what the Ukrainians want to maintain their sovereignty.
“When it comes to the future, we and allies and partners are going to want to make sure to do everything we can to ensure that this can’t happen again and that Ukraine has the means to defend itself, to deter further Russian aggression,” he said. “So we will look at anything we can do (to) back up that kind of outcome.”

a charity offers hope to kids with cancer

wartiso septiBlogsApril 3, 2022
In war-torn Syria DAMASCUS, SYria (AP) — At the children’s cancer ward in a hospital in the Syrian capital of …
END_OF_DOCUMENT_TOKEN_TO_BE_REPLACED