Liverpool in good shape ahead of the Champions League final 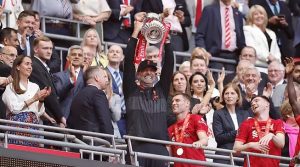 Liverpool have just won the FA Cup, they also won the Carabao Cup, they are still fighting for the Premier League (one point behind City with one game to go); and, in 10 days, they will have their greatest challenge of the year.

Their mission will be to win their seventh Champions League, equalling Milan’s total. Against Real Madrid, on Saturday, May 28, they will try to become the joint-second-best in history… behind Los Blancos themselves (13 titles).

The injured
There are three injured players (all starters), but Liverpool are counting on all three for the final.

Klopp said Fabinho is progressing “very well” but would not play until the final. Mo Salah (muscular) and Virgil van Dijk (knee) are out against Southampton on Tuesday but could play against Wolves on the final day of the league. They are set to play in Paris, all going to plan.

A team without flaws
Liverpool are a great team. It is obvious. Their results and performances prove it. It is difficult to find fault with them.

“I don’t think they have any weaknesses,” says Paul Joyce, Reds specialist in The Times.

“Klopp takes a lot of risks with the defence pushed up high, but Van Dijk controls everything.”

Salah was injured after half an hour in that game. In Paris, there will be a better and more mature Liverpool line-up, with Alisson for Karius (no comment necessary); Ibrahima Konate for Lovren; Luis Diaz for Firmino (much improved); and an improved midfield, which, barring injuries, will consist of Fabinho, Henderson (or Naby Keita) and Thiago Alcantara.

Suffering at the back
Liverpool are used to defending in a high or medium block (as they say nowadays), that is to say, they will either press high or wait for you in midfield, always with a high line. The (few) times they have been forced deep (Man City did it) they have suffered. Everyone agrees: Klopp has no plan when he sees his team penned in at the back. That’s why he tries to avoid it.

The goalkeeper
Alisson is one of the best in the world. He brings the ball out like a midfielder, he’s very accurate. Between the sticks, he is very complete, either when coming out (he makes the most of his wingspan) or making himself big on the line. Just 13 goals conceded in his 12 matches of this Champions League, with four clean sheets.

Defence
The back four of Alexander-Arnold-Van Dijk-Konaté-Robertson are very well-rounded and play from memory. Konaté has been the big surprise this season. Exceptional in both areas. Great complement to ‘the boss’ Van Dijk (the best defender in the world?).

On the flanks, Alexander-Arnold and Robertson are secure at the back and a major part of the attack. If Robertson doesn’t make it, the Greek Konstantinos Tsimikas has also given a great account of himself of late.

Midfield
Fabinho, if he is fit, is fundamental, as he has the legs to get where Henderson and Thiago cannot. A midfield that combines position, possession (with Thiago) and experience. A unit that is difficult to pass in transitions and has great legs. It is vertical by speed or precision (Thiago). And it is far superior to the Henderson-Wijnaldum-Milner trio Madrid faced last time in Kiev.

One of the best in the universe. Mane-Salah-Luis Diaz. The best, right now, is the Colombian, who put on a show, without reward, in the FA Cup against Chelsea. In the Champions League, their numbers are: Mane (5 goals in 12 games); Salah (8 in 12); and Diaz, including Porto (4 in 12). Very difficult to stop, with Luis Diaz on the left; Mane as a non-false but unconventional No.9, and Salah on the right.

That’s Liverpool with ten days to go. Along with City, they could be the best team in Europe, in terms of play at least, in 2022. But up against them are Real Madrid, winners of the last seven Champions League finals they have played in, big words that transcend the game itself. And Liverpool know it.

Both Mohamed Salah and Virgil van Dijk both went off injured during Liverpool’s FA Cup final triumph over Chelsea at Wembley Stadium on Saturday evening.

With two weeks to go for the Champions League final against Real Madrid, Liverpool fans were worried that two of their team’s most important players may miss out.

However, Jurgen Klopp was optimistic after the penalty shootout victory against Chelsea that both Salah and Van Dijk will have recovered in time to feature in the Champions League final in Paris on May 28.

The German coach made clear that neither Salah nor Van Dijk will be at his disposal for Tuesday’s duel against Southampton, but he expects them to be available for Sunday’s match against Wolverhampton Wanderers.

“No. Virgil definitely not,” Klopp replied in Monday’s press conference when he was asked if his two stars would feature against Southampton.

“That was pretty much clear before the game already. We thought this was the game [to rest him] because he played really a lot. Saturday-Tuesday again was clear.

Europe Saxophones Market – May See a Big Move by 2026

out of the parking lot

The fundamental intuition of how international mark

Christina SweetDesign SkillsJuly 2, 2022
Plus, you will have access to 25 detailed videos featuring instructors who explain the most commonly tested concepts – it’s …
END_OF_DOCUMENT_TOKEN_TO_BE_REPLACED