Russia’s invasion of Ukraine is redrawing the geopolitics of space

Klaritta KlarittaBlogsMarch 11, 2022
The International Space Station is operating as normal, but other partnerships are unravelling.

Russia’s invasion of Ukraine is redrawing geopolitics not only across the planet, but also in space. International collaborations are being shaken to the core as space agencies and researchers grapple with the ramifications of the war.

Among the biggest questions is the fate of the International Space Station (ISS), the orbiting outpost that is currently home to two Russian cosmonauts, four US astronauts and one European astronaut. Since 2000, when people first moved in, the ISS has generally managed to stay out of Earth-bound politics — but the Ukraine conflict could change that. 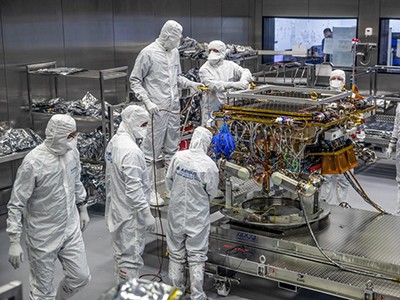 “The mood on board is probably similar to here on Planet Earth about this tragic situation,” says John Grunsfeld, a former NASA astronaut. “Keep in mind, the crew does fly over Ukraine and can look down and see the devastation, the fires and the smoke. It must just be very tense.”

Other collaborations in space are also throwing up new challenges, as Russia and Western nations pull out of joint projects. Many that remain face uncertain futures.

The war is ending partnerships that began three decades ago to bridge the divide between Russia and the West. “This will fracture that relationship built after the end of the cold war,” says Asif Siddiqi, a historian at Fordham University in New York City. “When historians look back, it will be 1991 — the collapse of Soviet Union — to 2022.”

By design, the ISS relies on Russia working together smoothly with 14 other nations. Part of the station is Russian-built and operated by cosmonauts, and the other part is built and run by the US, European, Japanese and Canadian space agencies. Each is dependent on the other for key services: the NASA-led side of the station provides electrical power to the Russian side, while Russia provides the orbital boosting that is occasionally needed to stop the ISS from falling to lower altitudes and disintegrating in Earth’s atmosphere.

According to NASA, the space station is operating as usual. None of the astronauts or cosmonauts on board has said anything publicly about the invasion of Ukraine. On 9 March, astronaut Matthias Maurer released an upbeat video tour of Europe’s science laboratory on the ISS.

“Astronauts and cosmonauts talk about how human spaceflight is beyond geopolitical tensions, because you can have cooperations that don’t exist on Earth,” says Julie Patarin-Jossec, a sociologist in Paris who has studied the relationships among the ISS partners. But now, “it’s the first time since the cold war that geopolitical tensions on the ground have had a negative impact on human spaceflight”.

artfirman naduBusinessMarch 11, 2022
Automation technology will support the business world to create a variety of work environments and provide opportunities for employees …
END_OF_DOCUMENT_TOKEN_TO_BE_REPLACED

Use the Best Product to Successfully Prepare SAP Exa

Steven PaulBlogsApril 28, 2022
Actual SAP C_S4HDEV1909 Exam Questions clear your exam in one shot It is important to pass certification exams for candidates …
END_OF_DOCUMENT_TOKEN_TO_BE_REPLACED